Actions that result in the best outcome for anyone can often be viewed as selfish acts because they help themselves or selfless acts that help others.  As President BillClinton and then Joey from Friends, explains, selfish and selfless are the same thing…

Most importantly, helping others helps improve the whole system which in turn is personally beneficial. Selfless is selfish.  My favorite NYT columnist Thomas Friedman made this point again in his October 9, 2018 linked Column that I encourage you to read, “Donald Trump Versus the Jungle: The president’s fantasy is that the U.S. can ignore the global forces of nature.”

In the article, Friedman suggests America, for the last 70 years since WWII has been providing a leadership role to encourage countries to make good choices for its citizens instead of hoarding resources and letting their citizens be poor and disadvantaged.  He suggests because of this, “…we have been living in the greatest prosperity ever known — globally — and we’ve witnessed the most widespread booming of democracy and the longest period of great-power peace ever known.”

Why did we do this?  According to Friedman, his writing seems to suggest selfish, selfless, synergistic motives:

We did not do all of this out of an abundance of generosity, or the post-World War II statesmen saying, ‘Gosh, how do we make the world a better place?’” he added. “It actually came from them saying: ‘How do we prevent the world backsliding into the kind of world war we just survived?’” This was not charity for them, but cold, calculating self-interest. They knew any order they created would pay back a hundred times for the world’s biggest economy.

In other words, this liberal world order “is not the product of human evolution” — as if human beings have somehow learned to be more peaceful with one another, Kagan argued. It developed because the most powerful nation on the planet, the United States of America, “was born of Enlightenment principles,” and, after being dragged into two world wars in the 20th century, it decided to use its power to spread and maintain those principles — not everywhere and always, but in many places a lot of the time.

In other words, he seems to be suggesting we should work to generate comprehensive improvements by creating pervasive, reciprocal, selfish, selfless, synergistic interactions so everyone and everything benefits! Please share your thoughts.

If you are interested, here is a short video about selfish selfless synergy:

Stopping the ship is necessary but insufficient.  Not only do we have to stop the ship and turn it around, we have to get it going in a useful direction as fast as possible.  In other words, we need to fix what we broke.

We are all on the same ship. See There is Only US, There is no Them.  Everything is connected, when anything changes, everything adjusts.  Based on our current trajectory, we need to turn the ship around and set sail for a better destination.  Besides, why should we slow things down when we can design and get to a better, not just a less bad, tomorrow.  Why choose anything else?  Of course this also means fulfilling and rewarding work!

We can design tomorrow in such a way that makes things better as it also prepares for possible disasters.  This is a future that is an Idealized Outcome.  Many examples exist.  One example is how The Netherlands did this in their country when they were flooded in the 1950’s.  They choose to build a for a better tomorrow. Realizing their land was below sea level, instead of just cleaning up each time they were flooded, they redesigned their country to make it better as it also prepared them for likely flooding.  See “The Dutch Solution”

We can use the “The Dutch Solution” in all areas.  We have to do better, as shown in the documentary “Burned“, in the quest for dollars, poorly thought out solutions did not help and caused damage. According to the story outlined in Burned, due to accounting chicanery, companies are receiving government subsidies while causing more pollution.  The chicanery comes about when trees are clear cut and harvested in America and burned in Europe.  Both countries pretend the carbon is accounted for on the other end while in reality neither do. Besides not accounting for the potential carbon release from clear cutting or burning the trees, these energy supplying wood pellets cause 50-60% more carbon to be put in the atmosphere than if coal were burned. 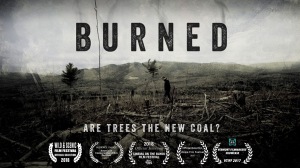 Some suggest we broke earth.  I don’t know that we broke earth, but we did create a different path. The perfect Holocene Era on earth that made life for humans not only possible, but ideal, was turned into the Anthropocene Era.  This era is a proposed epoch dating from the commencement of significant human impact on the Earth‘s geology and ecosystems, including, but not limited to, anthropogenic climate change.

Eugene Robinson’s Washington Post column, Climate Change Is No Longer Just a Theory  explained climate change in simple terms.  He explains how we are now experiencing, not just predicting the changes scientists have been discussing for some time. In other words, we must take action to make things better, or in other words, we must Turn the Ship Around. It is possible with work and this has has been demonstrated, most notably by nature.

To bring our situation to life, The New York Times reports that Apple has just landed rights to Losing Earth: The Decade We Almost Stopped Climate Change, a novel written by Nathaniel Rich.  According to the NYT, the show will air in 2019 and Anonymous Content will be producing it along with Anonymous CEO Steven Golin, and Rich himself. Rich will also be working on a related book called Losing Earth, which will be published next year.  This story was also covered by the New York Times, The Daily podcast (The Daily is a  Great Podcast I listen to each weekday morning):

Additionally, “Losing Earth” was published in the The New Yorker magazine. This story highlighted missed opportunities.

Nobody can know for sure what will happen because the future is not written yet, however if we get it wrong, we all lose.  Climate Change should not be something that becomes a political battle.  Climate change is a bet we cannot lose.  As I wrote about at this post, “Today’s Pascal’s Wager, One We Must Make!”

In the 1600’s, Blaise Pascal suggested we should believe in God because believing had no down side while not believing meant everything could be lost.  Today, the wager we must make revolves around our ecology.  Not only is there no downside to doing what is ecologically sustainable, it is more profitable, over the short and long-term. Done well, making the choice for a cleaner, greener more efficient future that makes life more livable for everyone and everything only has benefits.

Nature has already figured out how to give and get the most through good design. For example, a tree grows using carbon nourishment, creates a byproduct that replenishes our oxygen supply, and its roots hold and support soil that also absorbs excess water as to hold back floods.  As it does all this, it also provides food and shade for animals. Unbelievably, a trees roots also interconnect underground to create a sharing economy.  Trees share water and even provide water to trees most in need.  In other areas, as explained in Charles Mann’s book, “The Wizard and the Prophet: Two Remarkable Scientists and their Dueling Visions to Shape Tomorrow’s World”, natural landscapes and the species that live on them perform useful functions: they purify the water, decompose wastes, nourish corps, house wildlife, and regulate air temperature. Nature, of which we are a part, has created a complex synergistic sharing economy so everyone and everything benefits.  We can and should follow its lead.

We are a component or a part of nature. Successful components in nature evolve with the system.  We can evolve into a successful component in nature by generating comprehensive improvements through the creation pervasive, reciprocal, selfish, selfless, synergistic interactions that will benefit everyone and everything! In other words, set our ship on a course for a better tomorrow from which life is made more livable for everyone and everything.

Please share your thoughts on how will take action to help a better tomorrow.