Evidence suggests we like helping others because it makes us feel good about ourselves for doing something good. By saying I am selfish I mean that I want others to learn things that can help them have a better life and be better at what they do. Of course that means I start with the assumption that people are good.  Existing evidence confirms that most people are good.  If not, society could not function.

Altruism can also be thought to be disingenuous because we feel good for doing good.  As George Bernard Shaw explained:

To me he is describing the ideas of Selfish, Selfless, Synergy, in other words we want to feel good for doing good. We help others because it makes us feel good. Best actions help the whole system is work better, because as John Muir discovered, everything is interconnected: 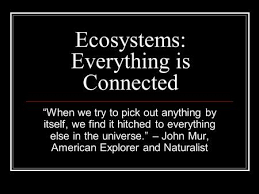 For me John Rosemond also made this point in his column on April 8th, 2018.  In his column on Attachment Parenting, I understood him to explain how we are all in this together:

Please share your thoughts.  I will continue to work to create all good by generating comprehensive improvements through the creation of pervasive, reciprocal, selfish, selfless, synergistic interactions so everyone and everything benefits, or by practicing paneugenesis.  I look forward to hearing about the how you help generate good for everyone and everything.

Researcher and professor in North Carolina. My focus is on the development of positive health and creating a better life for all. I want more to engage in selfish, selfless, synergistic acts which I call practicing paneugenesis. Paneugenesis is creating interactions from which everyone benefits. View all posts by bewellr

One thought on “Is Altruism Disingenuous?”