Robert Putnam’s new book, Upswing: how America came together a century ago and how we can again suggests we are the verge of a move toward togetherness. He further documents that our initial move mid 20th century from from”I” to “We” did not set sights high enough for what we could be or with regard to full inclusion because we did not Operationalize an Idealized Outcome to become what we really needed to be for it to work. The precursor of inclusiveness he suggests was left out because it would have been helpful to help all do better. Here is the review I posted on Good Reads and Google Books. 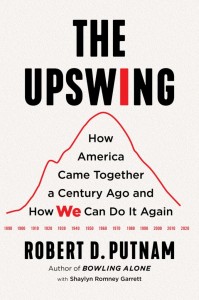 Upswing: how America came together a century ago and how we can again provided an interesting perspective. It was unique because it looked at changes over a longer period of time than is typical, 125 years. Generally books examine changes and hypothesize why. This books longer time frame was interesting because the view was about multiple changes that occurred. He described the changes as the I-We-I inverted U curve.

He demonstrated, with abundant data, how the selfish, individualistic period of the early 20th century, the Gilded Age, evolved into a communitarian, altruistic mid 20th century stage, in the 50’s and 60’s, that then moved back toward an individualistic “me” stage. He explained how the mid century move toward “we” did not aim high enough because it did not include race and gender benefits. He also documented that by aiming low, nobody did as well as they could have. In other words, we did not seek to “Exceed Expectations” as we should have.

Helping all in the “we” benefit would have helped all succeed better than the less inclusive benefits produced. He also put to rest the ideas that social media, big government, war, abundance, poverty or even immigration as “the” cause of the move to or from “I” or “We”. He explained that they could not be the primal cause because each of these factors caused movements either toward or away from both “we” and “I” depending on many other factors.

Communitarian interests and individual freedoms are cumulative and additive because they can be mutually beneficial. Overall, this suggests benefits from #SelfishSelflessSynergistic actions. In other words, actions can provide individual benefits in ways that also serve others and are holistically beneficial. My understanding of Putnam’s recommendations are we should aim to generate actions that produce comprehensive benefits through the creation of pervasive, reciprocal, selfish, selfless, synergistic interactions so everyone and everything benefits.

In this new year it would seem wise to follow Robert Putnam’s recommendations to help everyone and everything benefit from another Upswing!

Researcher and professor in North Carolina. My focus is on the development of positive health and creating a better life for all. I want more to engage in selfish, selfless, synergistic acts which I call practicing paneugenesis. Paneugenesis is creating interactions from which everyone benefits. View all posts by bewellr